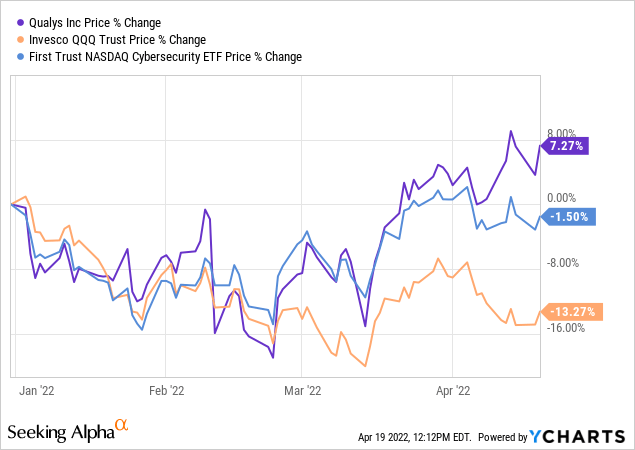 Just as other cybersecurity plays held by the First Trust NASDAQ Cybersecurity ETF (CIBR), Qualys’ (NASDAQ:QLYS) stock has outperformed the broader technology sector represented in the chart below by Invesco QQQ Trust (QQQ) soon after Russia’s invasion of Ukraine in February 2022. The reason is that these companies play a vital role to defend western corporations against escalating IT security threats posed by nation-state actors after the U.S imposed economic sanctions on Russia. Additionally, Qualys has delivered an even better year-to-date performance of 7.27% compared to CIBR.

Now, this outperformance has been achieved despite inflation rising rapidly and prompting the Federal Reserve to accelerate the pace at which it will raise rates. In these challenging economic conditions where supply chain bottlenecks are also increasing the cost of doing business, it is important to look for a stock that is able to increase earnings and cash flow. The aim of this thesis is to assess whether Qualys, a tech stock, fits the bill and qualifies as “inflation-proof”. I start by comparing its valuations and earnings with respect to peers.

Scanning the cybersecurity market for a pick, many prefer Palo Alto (PANW) as it is a much larger company and growing two times more rapidly than Qualys as shown in the table below. Empowered by these metrics, its valuations are rich at a non-GAAP trailing price to earnings of 98.55x, or more than two times Qualys’.

Now, in an economic environment where wage inflation is biting harder, it may prove difficult to achieve or maintain profitability even if a company is growing rapidly. For this purpose, except for Qualys, all others have negative EBIT (operating income) margins.

Another noteworthy point is Qualys’ higher trailing price to sales ratio with respect to other peers, despite lower revenue growth. Hence, it may easily be disqualified by those who focus on the P/S metric, but, with rising inflation and the central bank hiking rates, comes the issue of slowing economic growth. This is a key reason why more investors are focusing on the bottom line and moving away from the growth strategy towards value.

For this matter, as shown in the pale blue chart below, Qualys has not only been steadily increasing earnings over the last 12 quarters but also been beating analysts’ consensus.

Going forward, the company expects an EPS of $0.80 to $0.82 for the first quarter of 2022, whose mid-point would represent a $0.07 increment over the same period last year. However, this represents a slight $0.03 decrease with respect to Q4-2021 earnings and is explained by additional costs incurred in recruiting staff in order to scale up operations.

With more scale, first-quarter 2022 revenues are expected to grow by 16% to 17% with respect to the same period in 2021. This is higher than the 15.80% seen in Q4-2021, out of which cloud-based subscriptions grew by 34%. Now, getting customers to subscribe and benefit from more stable monthly fees in contrast with relatively less-predictable yearly contracts has been the preferred option for SaaS companies, but in order to succeed in a highly competitive industry where larger peers have higher marketing budgets, Qualys’ relies on product differentiation, namely scalability, and automation.

First, scalability whereby customers choose and pay only for the part they need enables penetration into competitors’ turf without having to spend a disproportionate amount on sales and marketing. Second, by incorporating a higher dose of automation within security compliance operations, which are normally lengthy manual procedures, the number of manhours of work required is reduced. As a result, in 2021, the adoption of Qualys solutions, especially among the larger customer segments who spend $500,000 or more, increased by 17% over 2020. This should further increase with the ability of the company to bundle together disparate functions like asset inventory, threat detection, and risk mitigation into a more integrated cloud-based offering.

Pursuing further, one of the reasons why you do not hear much about Qualys during talks about antivirus or ransomware is that it is primarily known for its Vulnerability assessment tools which it has branded as VMDR (Vulnerability Management, Detection, and Response). This is about checking the degree to which organizations are protected against the latest external virus threats and internal risks constituted by unscrupulous employees.

Thus, driven by the rising IT security threat environment with Chief Information Security Officers (CISOs) looking to mitigate risks of ransomware attacks, the company saw continued adoption of VMDR, which according to the CEO is currently deployed by 36% of its customer base. This signifies that there are significant cross-selling opportunities and not incurring the same level of expense as acquiring new logos.

As for threat detection, the company was among the first to identify the Log4Shell vulnerability back in January this year and is recognized as a key player in the industry as evidenced by the awards below.

Now, one of the reasons for these recognitions is that Qualys has also been able to cater to security in a hybrid environment including both the office and home. Hybrid work is a growing market resulting in cybersecurity plays extending the capabilities of their detection and response solutions, like CrowdStrike (CRWD) with Falcon XDR and SentinelOne (S) through Singularity XDR.

Here, Qualys has gone a step further with its Context XDR. In addition to detection, the aim is to provide information about the context of the asset in light of business usage. A practical example is highlighting those assets which are end-of-life and have to be replaced, in turn facilitating operations and relieving over-stretched IT personnel in an area where prioritizing cyber-attacks has proved detrimental to normal routine work.

Now, in light of competition, even a high level of product differentiation has to be complemented with additional sales efforts which entail more expenses. As a result, operating income fell by $3 million from the third quarter of 2021 to the fourth one. Thus, the company is not immune to the risks of wage inflation moving higher as it has to pay more for specific talent.

On the other hand, it was able to increase free cash flow to $35.5 million during the same period, representing a 32% margin. Now, FCF margin is the ratio of operating cash flow to total sales, and a value of 10%-12% is considered good. Consequently, with margins of 32%, and sales expected to accelerate by 17%-18% to the $482 million-$485 million range in 2022, Qualys can significantly grow its future cash flow. This matters in an inflation-pressured business environment where forward cash flows bear lower purchasing power in current value terms when projected in the future.

Thinking aloud, with its rich valuations compared to SA’s top value stocks pertaining mostly to the energy sector, techie Qualys does not have the usual characteristics which investors look for when selecting an inflation-proof stock, but I remind them that these are unprecedented times, and with Covid-induced supply chain challenges still around and the Russian threat getting worse, things are different this time around. In this respect, software development is more immune to supply issues as seen in the second quarter of 2020 right in the middle of the Covid pandemic when energy stocks that depend on hard materials to operate were impacted.

Furthermore, Qualys pays no dividends, but again to its credit, it returned $130 million of cash to shareholders through buybacks. It still retained $405 million of cash on the balance sheet as of December 31, 2021.

Despite evolving in a highly competitive market and facing much larger competitors, Qualys has been able to exhibit profitable growth. This has been made possible through a higher degree of automation in solutions, scalability of products, and providing a consolidated security stack whereby different capabilities are available on the same platform. These features provide the company with plenty of levers to increase revenues while not having to raise individual product pricing.

With the latest CPI report coming out at 8.5%, inflationary pressures are impacting profitability, but the company has gross profit margins of over 78% (introductory table) which is synonymous with a strong platform for a software play, and the capacity to generate strong free cash flow. Additionally, with the high demand for cybersecurity protection and through signing up of larger corporations that tend to be less impacted than smaller ones during periods of stagflation or recessions, its business model is viewed as being sustainable and “inflation-proof”.

Finally, based on a comparison of the non-GAAP P/E metric with Palo Alto, Qualys is undervalued and could easily climb back to the $150 level and beyond, but, to be realistic, it forms part of the tech sector. As such, there are more pains ahead before investors finally realize its earnings and cash growth potential.